Your App Store screenshots are probably the most important thing when it comes to convincing potential users to download or purchase your app. Unfortunately, many apps don’t do screenshots right.

A quick overview over existing methods to generate screenshots:

Manually create screenshots on all devices and all languages

It comes without saying that this takes too much time, which also decreases the quality of the screenshots. Since it is not automated, the screenshots will show slightly different content on the various devices and languages. Many companies end up creating screenshots only in one language and use it for all languages. While this might seem okay to us developers, there are many potential users out there, that cannot read the text on your app screenshots if they are not localised. Have you ever looked at a screenshots with content in a language you don’t know? It won’t convince you to download the app.

Biggest disadvantage of this method: If you notice a spelling mistake in the screenshots, you release an update with a new design or you just want to show more up to date content, you’ll have to create new screenshots for all languages and devices… manually.

Please click on the pictures to enlarge them for more details.

Notice how the size of the font of the first 3 screenshots (iPhone 4, iPhone 5, iPhone 6) are exactly the same. Only the last screenshot (iPhone 6 Plus) the text seems larger as it’s a @3x display.

Create screenshots on one device type, put it into frames and resize them

This way, you only create 5 screenshots per language on only one device type and put them into frames. By putting the one screenshot into different frames, the tool you use can resize the resulting image to match the iTunes Connect requirements.

Below some example applications that use this technique. I only had to upload one screenshot and got the result shown below. (left: iPhone 4, right: iPhone 6 Plus)

A different example which now uses the correct device frame for each screen size. Do you see how very small the font on the iPhone 4 is? All 4 frames use the exact same screenshot. On smaller devices this results in very small fonts which are difficult to read for the end-user. On larger devices the screenshot is scaled up, which causes blurry images and fonts.

Don’t get me wrong, using a web service that does these kind of frames for you is a great and easy way to get beautiful screenshots for the App Store. It’s also the best solution if you don’t want to invest more time automating taking better screenshots.

Update August 2016: Use just one set of screenshots

With the iTunes Connect screenshot update on August 8th, 2016, you can now use one set of screenshots for all available devices and screenshots. iTunes Connect will automatically scale the images for you, so that each device renders the same exact image.

While this is convenient, this approach has the same problems as the device frame approach: The screenshots don’t actually show how the app looks on the user’s device. It’s a valid way to start though, since you can gradually overwrite screenshots for specific languages and devices.

To sum up, the problems with existing techniques:

To achieve such a nice looking status bar, I can really recommend SimulatorStatusMagic by Dave Verwer. It’s very easy to setup and you get all the above mentioned points for free.

You can also use the Quick Time recording feature, by connecting your real device via USB. This works nicely, however it requires you to own a physical device for each screen size.

I worked on screenshot automation for a really long time, but haven’t found the ultimate solution (yet). Even with tools like snapshot and frameit there are some open issues.

Okay, back to what you can actually do today :) Below are the results of nice screenshots, which were all generated completely automatically.

What’s wrong with those screenshots? The time isn’t 9:41.

On the iPhone 4, iPhone 5 and iPhone 6 the font size is exactly the same. The iPhone 6 Plus, again, has a @3x display which is why the text appears larger.

Since the above screenshot collection looks a bit messy I decided to automatically resize the screenshots in the following examples. Instead of leaving all screenshots 1:1 they now appear properly aligned next to each other. 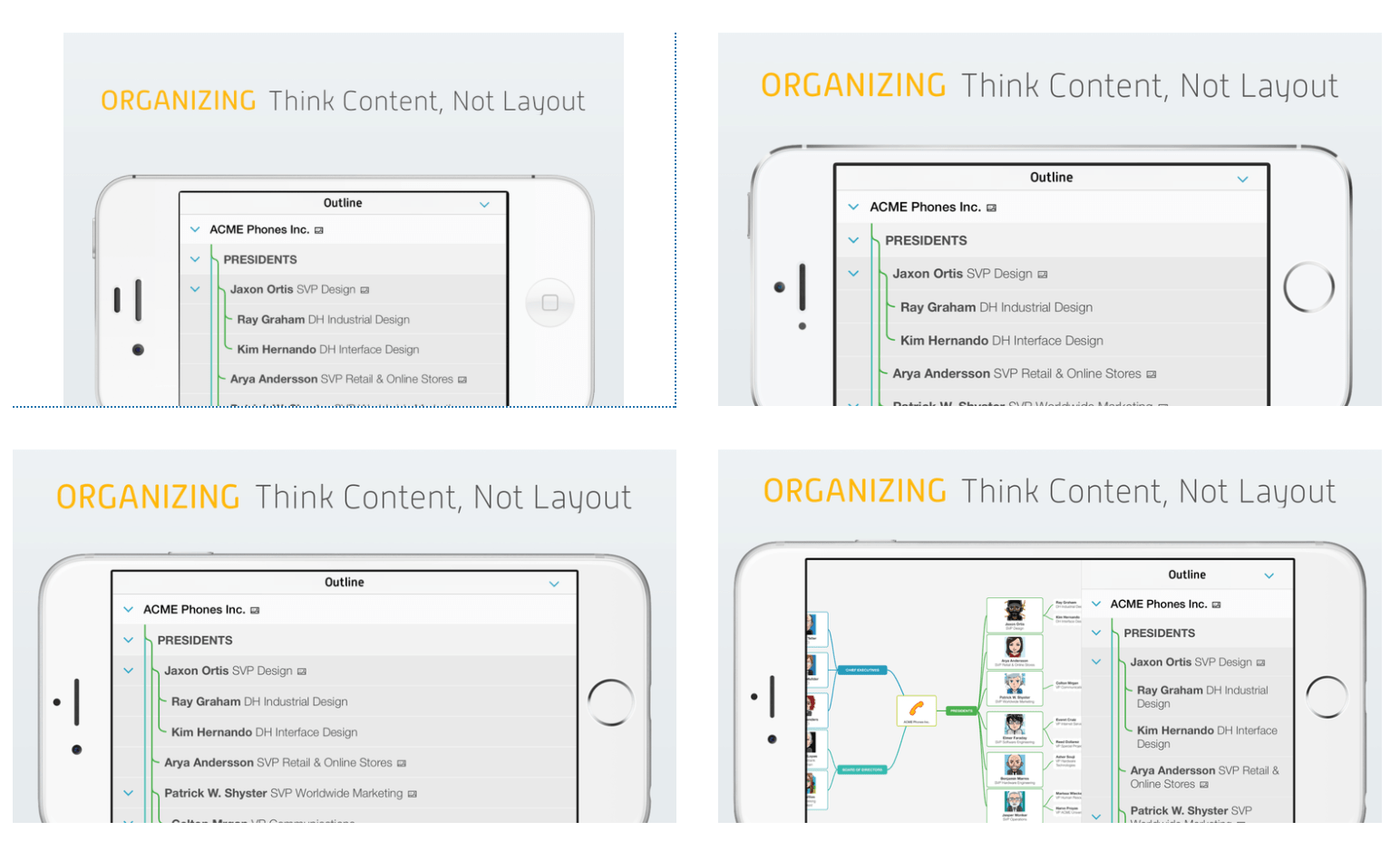 Landscape screenshots of MindNode: The iPhone 6 Plus shows a split screen when the app is in landscape mode. The smaller screen sizes show the list only. The users can see how the app looks like on their device before even installing the app.

The screenshots don’t have a status bar, since MindNode doesn’t show it in landscape mode.

Special thanks to Harald Eckmüller for designing the MindNode screenshots. 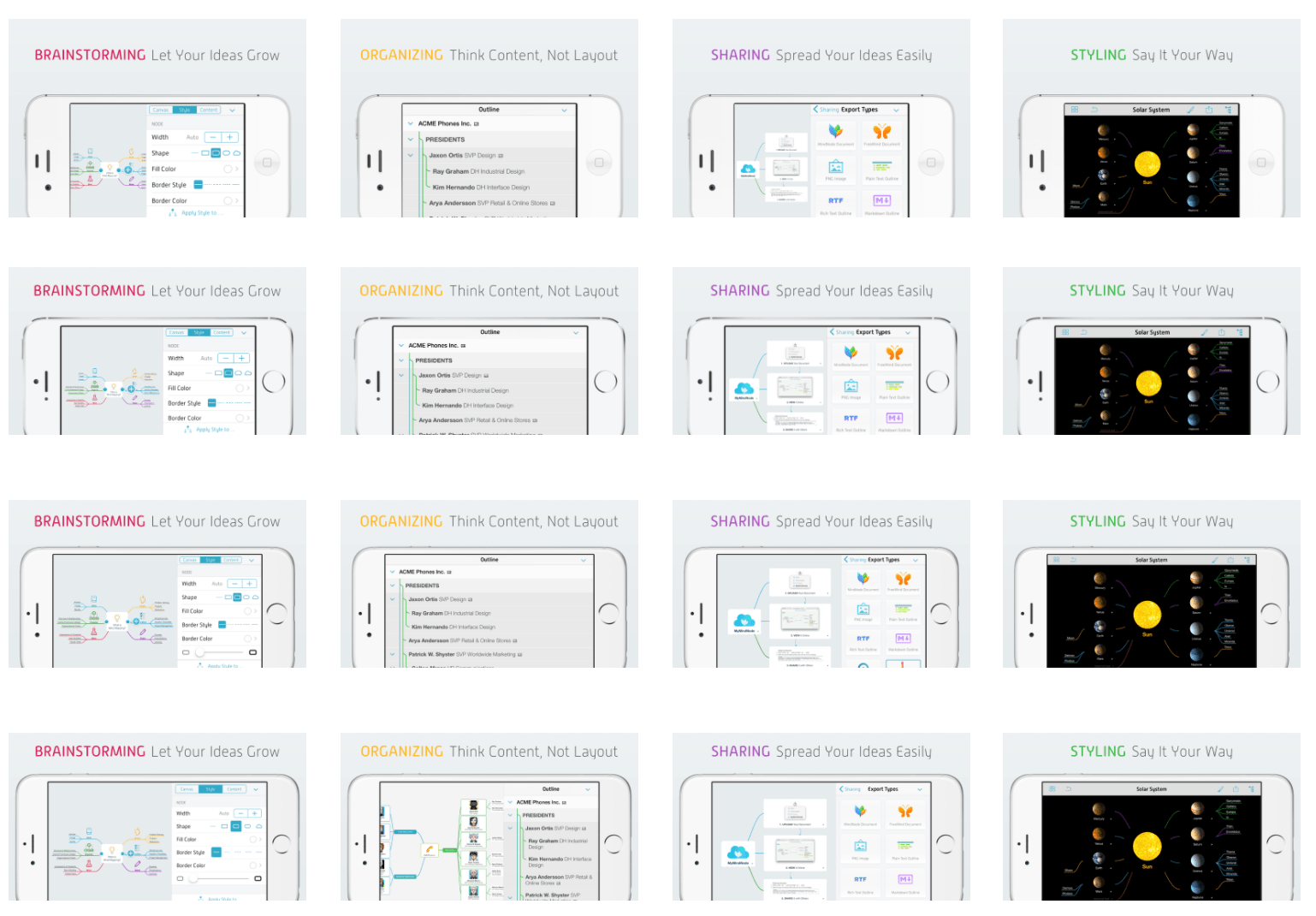 How does this look like when you support multiple languages?

How does this magic work?

Using snapshot you can take localized screenshots on all device types completely automatic. All you have to do is provide a JavaScript UI Automation file to tell snapshot how to navigate in your app and where to take the screenshots. More information can be found on the project page. This project will soon be updated to use UI Tests instead of UI Automation to write screenshot code in Swift or Objective C instead.

This step will create the raw screenshots for all devices in all languages. At this point you could already upload the screenshots to iTunes Connect, but this wouldn’t be so much fun. 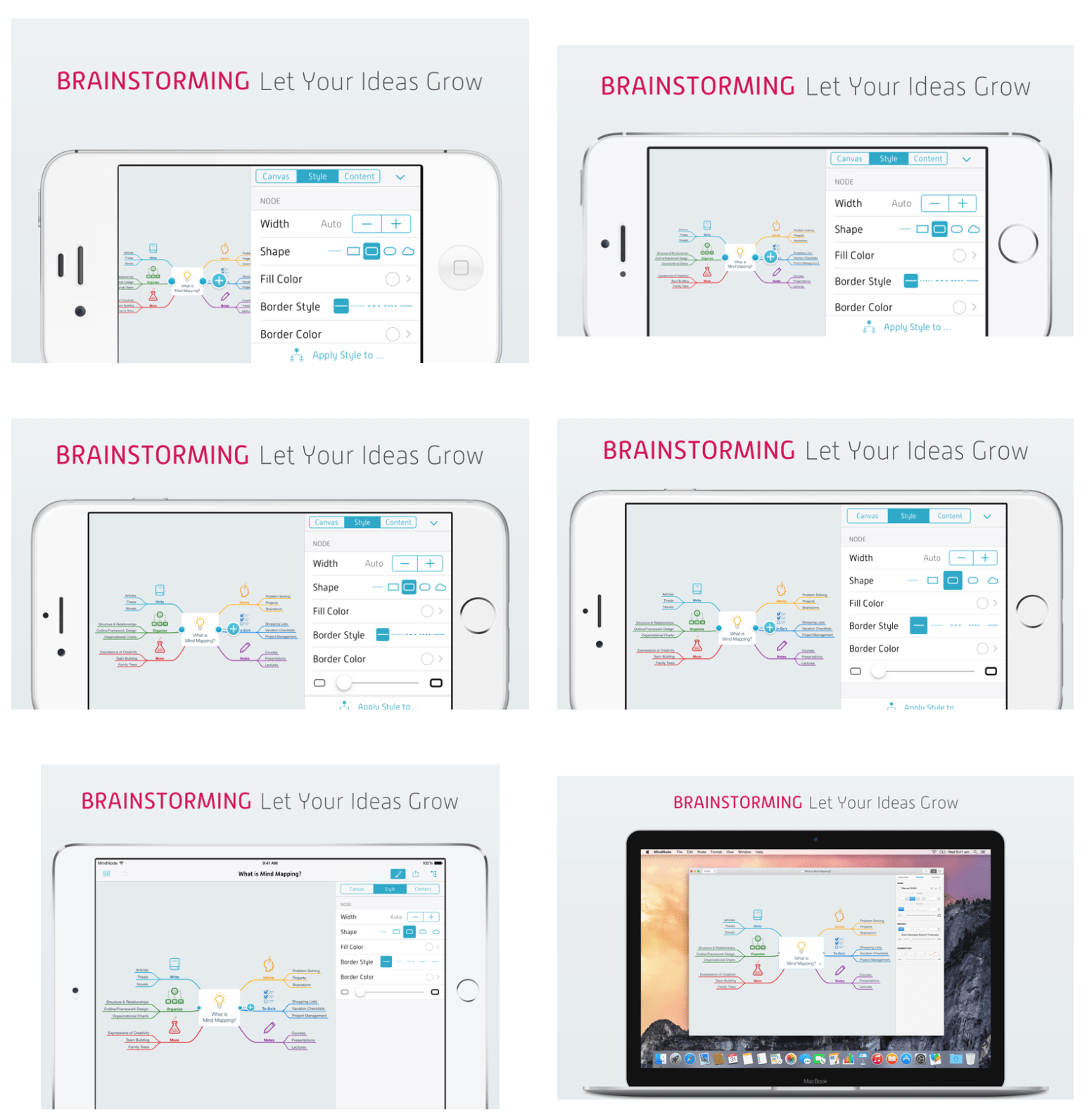 The same screenshot on the iPhone, iPad and Mac.

Take a closer look at the screenshots above: The iPad’s time is 9:41 and the carrier name is MindNode. The other screenshots don’t have a status bar, as MindNode doesn’t show it on the iPhone in landscape mode.

A timelapse video of snapshot creating the MindNode screenshots.

The generated HTML Summary to quickly get an overview of your app in all languages on all device types.

How can I get started?

To make things easier for you, I prepared an open source setup showing you how to use frameit to generate these nice screenshots, available on GitHub.

The interesting parts are:

All you have to do now is run frameit white, to frame all the screenshots generated by snapshot.

Calling snapshot and frameit after each after is far too much work, let’s automate this.

Take a look at the fastlane configuration of MindNode: Fastfile

To generate new screenshots, frame them and upload them to iTunes Connect you only have to run

snapshot, frameit and deliver are part of fastlane.

Special thanks to MindNode for sponsoring frameit 2.0 and providing the screenshots for this blog post.